THE CELEBRATION ENDS, THE WORK BEGINS

While looking at the artistic timeline of Ivano-Frankivsk, one cannot ignore the phenomenon of the Impreza Biennale. The unique event, which took place in 1989, changed the rules of the game and laid the groundwork for the development of the cultural environment not only of the city but also of the whole region and country. The Impreza environment broke away from the Soviet discourse, censorship, and restrictions; it was a powerful artistic reaction to a world that was inevitably changing—it was only necessary to foster it a little, to record, comprehend this process and pass it on.

post impreza has developed on this ground. However, it has faced new questions:

If we no longer have to deny modernity, should we consider postmodernity?
If we talk about the continuity of processes, then why talk about them through ‘post’?
If we are starting our own story, why be based on ‘Impreza’?
After all, if we want to look at the prospects of new artistic processes taking place in Ivano-Frankivsk here and now, why are we still looking back?

And here we return to the meaning of words.

The very name ‘Impreza’ in various interpretations can mean ‘impression’ or ‘celebration’. In other words, post impreza is what happens to us and the whole city of Ivano-Frankivsk after the celebration ends and the everyday work begins.

The word ‘post’ can mean both denial of previous experience and a starting point based on it. We stand on the shoulders of the Impreza generation and want to hold on to this continuity, for the Ukrainian cultural process has too often lost ties between generations throughout its history, being forced to reinvent things that have already been discussed and discovered.

We look to the future only because we can stand on the shoulders of those who began to create this future earlier.

Since 1989, Ivano-Frankivsk has come a long way from a closed city to a city that has become a new home for artists from across the country. And they all leave their mark on the city and their impressions of it in their creative work.

post impreza becomes a bridge that allows us to move from the banks of our past to the banks where plans and perspectives come to life. This is just one of the points of this timeline, which is constantly ongoing in time. It is almost like a celebration: when one ends, it’s time to start preparing for the next one.

post impreza is a media that focuses on the local art and cultural life of the city of Ivano-Frankivsk and its region.

post impreza reflects and analyzes, introduces its readers to the works, processes, and personalities of the local cultural process. We write on topical issues and present retrospective texts that have been published before and that today allow us to better understand the conditions in which the cultural environment of Ivano-Frankivsk was formed.

We are interested in the continuity of the processes of local art history. We understand the impact of the Impreza Biennale on the cultural environment of the city and its region. However, we do not plan to limit ourselves to it. post impreza is an opportunity to re-evaluate and recalculate what happened after the Impreza.

We plan to identify and analyze how the art scene of the Ivano-Frankivsk region has changed and is changing through revolutions, waves of migration, and war.

post impreza aims to create a digital media archive that will preserve the legacy of the artistic environment and make its presentation easier.

in our texts, criticism of the object of art is combined with respect for its creator;

the media cannot be used as a platform for the promotion or self-presentation of a single point of view. It is a space for diverse thoughts that can live together and can be interesting for each other;

the project is open to cooperation and co-creation of special commercial and non-commercial projects, but they cannot be the main content;

our readers can offer announcements of events as well as topics for materials, but the decision whether to publish them or not rests with the curators and editorial board. 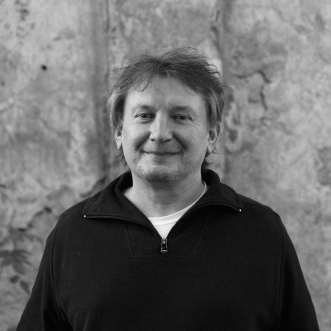 Artist and curator. Born in Ivano-Frankivsk, he was educated as an art historian at the Ukrainian Academy of Arts in Kyiv.

Zvizhynskyi is a Gaude Polonia fellow (2007). During 2013-2016, he was a director of the Center for Contemporary Art in Ivano-Frankivsk. During 2019-2020, he was an expert at the Ukrainian Cultural Foundation. Now he works as a curator at the Vagabundo Underground Art Space.

Anatolii Zvizhynskyi is an author and curator of many contemporary art programs and exhibitions, which were implemented in Ivano-Frankivsk.

He is also a founder and ideologist of the Marginesy Gallery (Kyiv—Ivano-Frankivsk), co-editor of the In the End almanac on Contemporary Art, curator of the last Impreza, co-author and compiler of the collection Impreza. International Biennale and the almanac about Ivano-Frankivsk contemporary art titled The First Case. 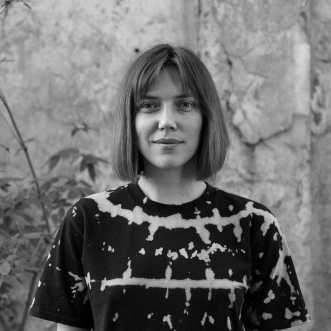 Film director, curator of cultural projects, and founder of the Ukrainian online cinema Takflix.com. Parfan is a director of the documentary film about Ivano-Frankivsk titled “Heat Singers” (2019).

Born in Ivano-Frankivsk, Nadiia Parfan studied in Kyiv where she has been living and working up until now. She is also a co-founder of the International Festival of Film and Urbanism “86” (2015-2017) in Slavutych and a member of the Ukrainian Film Academy. 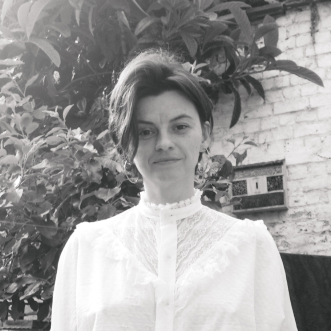 Interdisciplinary artist and theater director. Born in Kolomyia, she studied cultural studies at the Kyiv-Mohyla Academy and stage practices in Madrid and Brussels. 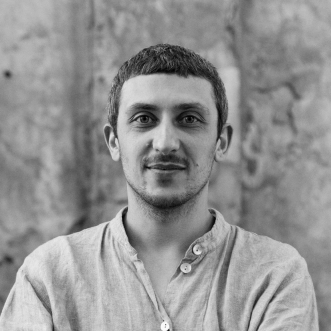 Artist and curator. Born in Ivano-Frankivsk, he lives and works in Kyiv.

Samborskyi studied at the Institute of Arts of the Precarpathian National University (2005). In 2009 and 2012, he received a scholarship from the Polish Ministry of Culture. Samborskyi is a winner of the MUHI Competition (2012), laureate of the First Special PinchukArtCentre Prize as part of the Open Group (2013), winner of the Open Call by Dymchuk Gallery for young Ukrainian artists (2017), and nominee for the PinchukArtCentre Prize (2018).

Curator of the artist-in-residence program in Ivano-Frankivsk (2015) and the Porto Franko International Festival of Contemporary Art (2018). 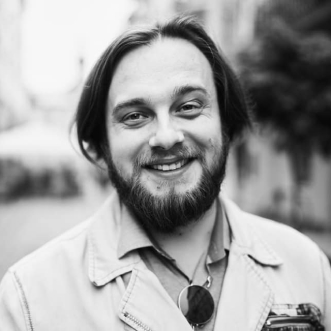 Writer and translator. Born in Kalush, he studied in Kyiv at the Kyiv-Mohyla Academy and lives in Ivano-Frankivsk.

Ukrainets translates books, writes books and talks about books. He writes in the genres of historical prose and fantasy. His latest novel Discordia (2021) tells the story of Stanislaviv in the times of the Austrian Empire.

He is also a co-creator of the Your Underground Humanitarian YouTube channel. Ukrainets researches the topics of cultural heritage and the treatment of its objects. 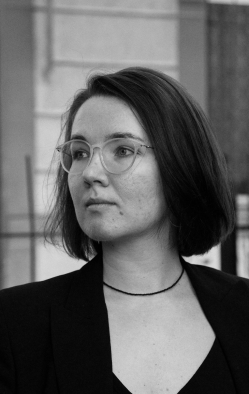 Journalist, poet, editor of special projects at The Ukrainians, and lecturer at the King Danylo University. Perekhrest is a Kyivan who moved to Ivano-Frankivsk. In addition to her journalism education, she obtained a degree in religious studies. Olha writes about culture and helps others write. 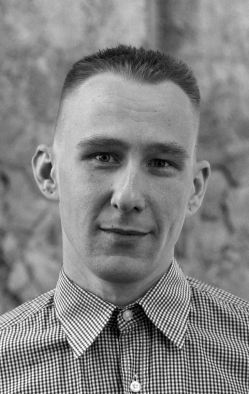 Manager of cultural and educational projects, socio-cultural anthropologist, and a little bit of historian. Boiko is a co-founder of the NGO “Ne Tskui”. Born in Vinnytsia, he lived in different cities in Ukraine and finally moved from Kyiv to Ivano-Frankivsk. Among his interests are the culture of memory, urbanism, and the human-city relationship in the socio-cultural dimension. 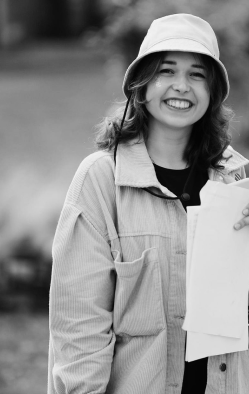 Communications professional, PR manager, and philologist by profession. Born in Kolomyia, she lives in Lviv. She loves high-quality journalism, so she helps develop it in Ukraine. 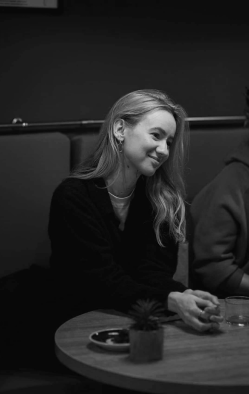 TV journalist and editor. In her profession, she focuses on projects about Ukrainian literature and culture. Suporovska is a podcast writer and ambassador of museums, especially the Ukrainian ones. At first, Ivano-Frankivsk was an unexpected shelter place for her during the war, and then it has become a rediscovered feeling of home.

Translator, poet, and cultural manager. She is an initiator of the VERBatsiya translation group and director of the TRANSLATORIUM Literary and Translation Festival. Born in Khmelnytskyi, she moved to Ivano-Frankivsk from Kyiv. By coincidence of life circumstances and out of interest in art, a significant part of her translation work consists of texts on culture and contemporary art. 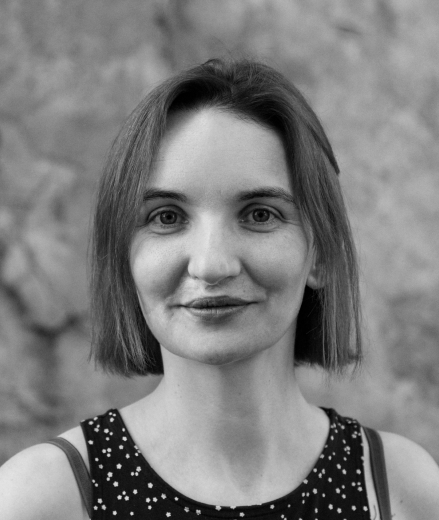 She co-founded and launched a number of organizations: the NGO “Insha Osvita”, a space in the Carpathians called Khata-Maisternia, the Asortymentna Kimnata Gallery in Ivano-Frankivsk and the proto produkciia agency for production of educational and art projects. Born in the Donetsk region, she studied in Donetsk and Kaiserslautern, and lived and worked in Berlin. In 2017, she found her home in Ivano-Frankivsk.

In 2021, Karavai was an expert at the Ukrainian Cultural Foundation. She has been a lecturer at the Dnipropetrovsk Professional College of Arts and Culture since 2020, and since 2022, she has joined the Academic Council of Cultural Studies at the Ukrainian Catholic University. In 2022, she launched an art evacuation program and joined the Museum Crisis Center team. 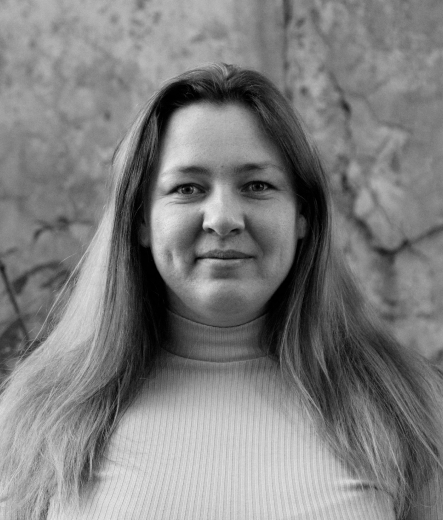 Co-founder of the proto produkciia agency for production of educational and art projects, the NGO “Insha Osvita”, and the Khata-Maisternia space. Born in Crimea, she lived in Ivano-Frankivsk since 2014 and in 2018 moved to Kyiv.

Diatel is a producer in the field of performing arts (opera CHORNOBYLDORF, OPERA LINGUA). Since 2020, she has been a lecturer at the Dnipropetrovsk Professional College of Arts and Culture. She is also a coordinator of the Power Here project implemented with the support of the European Commission. 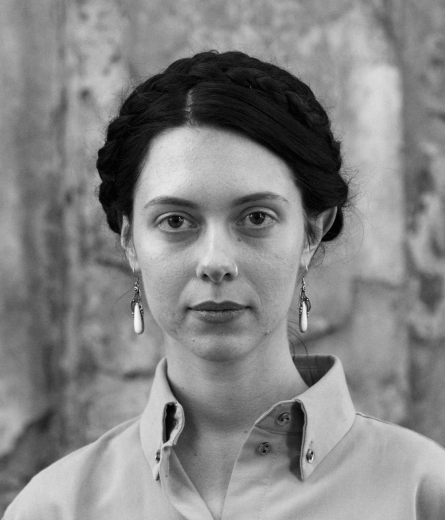 Born in Mykolaiv, she studied at the Lviv National Academy of Arts and the University of Arts of Poznan, majoring in art theory and history. She lives and works in Ivano-Frankivsk.

Since 2018, Potiomkina has been a curator of the Asortymentna Kimnata Gallery, where she has organized about 30 collective and individual exhibition projects. She is a curator and coordinator of a number of residency programs. In 2019-2021, she curated and produced an art program for the Detalization Electronic Music Festival in Ivano-Frankivsk. In 2021, she was a production manager of the Revisionist Syndrome art project.

Since the beginning of the full-scale war, Ania has coordinated the art evacuation program in Ukraine, the Working Room residency for displaced artists (curated by Lesia Khomenko), and the Body City art program for displaced adolescents (together with Olia Poliak and Maria Agisian).